Welcome to the website of Városfalva (in Romanian Orăşeni) village. We hope that we've made it easy for you to find the information you need about this tiny village in the heart of Transylvania. Comments and suggestions are warmly welcome, write us at varosfalva@gmail.com or post a message to the guestbook.

The coat-of-arms of the Transylvanian Unitarian Church: "Be gentle as a dove and wise as a serpent"

The first historical document that mentions the village is from the year 1317 in which the name appears as "Varosio". The nationality of the majority of the people in the village was Hungarian at that time, as it is today. The current name of the village derives from the words "vár" (fortress) and "falu" (village). According to historical documents, the village converted to Unitarian faith in the late 1500s. The old church building has been demolished in early 1600s, probably due to frequent floods of the Homoród river. A new church was built from stone in 1650 on a hilltop. A stone wall was built around the church between 1761-1765. Some parts of this wall are still visible and in good shape. After 133 years of use, the church building was demolished, probably due to earthquake damages. The current church building was finalized in 1785. The original tower was renovated several times, finally rebuilt completely in 1902. The last renovation took place in 1986, and further renovations would be needed. 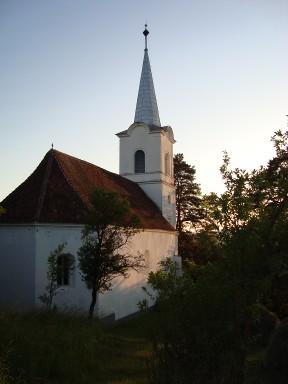 The villagers were originally of catholic faith, but around 1589 most of them converted to the Unitarian religion, influenced by the teachings of Dávid Ferenc (1510-1579). Dávid Ferenc (Francis David) was originally trained as a Catholic priest before becoming Lutheran and then Calvinist, finally to become Unitarian. He is revered as the founder of the Transylvanian Unitarian Church. He died in the prison of Déva in 1579, his cell is a place of pilgrimage. The Unitarian faith founded by Dávid Ferenc is still alive today in the Hungarian community of Transylvania. Unitarians claim that every person is God's creation and everyone has been given the freedom to choose which form of religion they find most appropriate. Unitarianism has a great tradition of liberalism and religious tolerance, going back to times when religious intolerance and wars were the norm in most of Europe. The greatest milestone of this tradition is the Edict of Torda, which proclaimed freedom of religion in the then independent province of Transylvania in 1568, a first of its kind in Europe.

Despite its small size, Városfalva gave several important intellectuals to the cultural life in Transylvania. Mihály Lombard de Szentábrahám (1683-1758) was a scholar, theologian and Unitarian bishop, considered the most important figure of the Unitarian Church in the 18th century. Unitarian bishop Dr. Szabó Árpád (1935-2010) also hailed from Városfalva.

Unitarianism is a nontrinitarian Christian theology which holds that there is only one God, in contrast to the doctrine of the holy trinity or the acceptance of saints as intermediaries to God. Jesus is God's best son and the true teacher of the Unitarians. Jesus was a human being, but through his character, faith and teachings became our redeemer. According to the Unitarian teachings each man is created as a good person and is given free will. When someone uses this liberty to do evil deeds they are responsible for their actions before God.

According to church documents, the children of the village were taught in schools already in 1624. The school was supported by the local church and the school building was renovated and rebuilt several times. Between 1854 and 1866 education was in German. After the First World War, as the region became part of Romania, the school became a public school and was integrated into the national education system. Today there is only an elementary school, whose building was built in 1932. After the 4th grade children continue their studies in the neighboring Szentpál (Sânpaul), Szentmárton (Mărtiniș) or the nearby Székelyudvarhely (Odorheiu Secuiesc). The local kindergarten closed in 2012 and children attend kindergarten in the neighboring village.

The old culture house was 100 years old in 1924 when the villagers tore it down to build a new one. However, the new building was constructed only between 1956-1959. At the same time, new buildings were constructed for the kindergarten and offices, as well as a bowling club next to the culture house. Most of these happened while Kovács István, a very talented, intelligent and visionary person was the director of the local school. 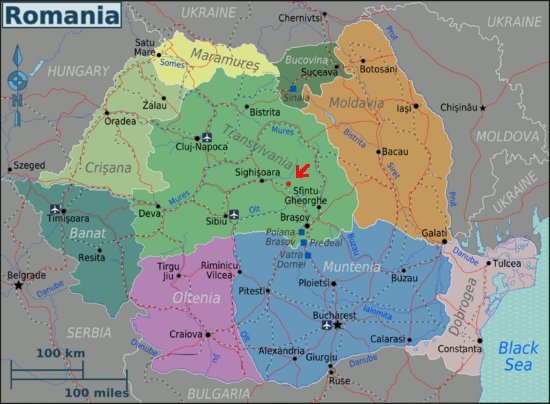 Romania is a country located at the crossroads between Central and Southeastern Europe, north of the Balkan Peninsula, on the Lower Danube, within and outside the Carpathian arch, bordering on the Black Sea. Almost all of the Danube Delta is located within its territory. Romania shares a border with Hungary and Serbia to the west, Ukraine and the Republic of Moldova to the northeast, and Bulgaria to the south. Romania has several historical regions with distinct characteristics, such as Transylvania, Moldavia, Dobrogea, etc.

If you would like to visit Transylvania or travel around our country, you might find the following links helpful:


Coming out from the south entrance of the city Odorheiu Secuiesc (Székelyudvarhely) on road 137, you turn left in Feliceni (Boldogfalva) and continue your way on road 131 towards Sânpaul (Szentpál) where you will turn a slight right and continue your journey on road 133. Before you enter Városfalva village you have to cross the river Nagy-Homoród, the bridge will be on the left. The route is about 24 km.

You can also check the route on Google Maps:

From Brașov (Brassó) or Sighișoara (Segesvár) the train comes until Cața (Kaca) which is 12 km (road 132B) away from the village. From there you can hitchhike or take a bus.

You can view some photos related to Városfalva, grouped into categories on the following pages:

The Városfalva Association was established in the end of 2009.

Our mission is to encourage local initiatives which increase the quality of life in Városfalva and in the Homoród-Valley.

If you would like to support this initiative - financialy or with other donations - contact us with any questions you may have:


Donations can be made to the following accounts:


Back to home page (in Hungarian)